Which competitions should you play, and which ones avoid?

Which spot the ball competitions should you play?

With online spot the ball being an ever increasingly popular format of running competitions, it seems that there are lots of options these days. Prizes vary from the typical car or cash prizes all the way to even houses. But are they all legitimate, and if so – should you play them?

Spend your money only on well established spot the ball competitions

Ones that are well established such as BOTB. There’s a reason why they have been running the competition since 1999, and by playing such competitions you can be sure that you’re not being scammed. Although, there’s absolutely nothing wrong in playing other spot the ball competitions.

And while the new competitions might provide slightly better odds for winning because of less players, but they also have a higher risk of:

Don’t play spot the ball competitions that are or end up being a one-off type of a competition, and don’t have any kind of a track record. It might be inviting, or it may seem like you have better chances of winning a completely new competition before other people find out about it. But you might also end up throwing away your money completely – if the competition itself or judging end up being a complete mess (if not a blatant scam). And the undoubtedly best way of finding out for you to see if a competition is a scam or not, is to wait and see if people actually win the prizes, and if the business running the spot the ball competition is transparent about their judging process and so on.

One prime example of a competition one shouldn’t have played is YourLddr. They supposedly were going to give a house in Central London away to the winner, in case they would sell enough tickets (which they didn’t – again supposedly). Or one could even say they didn’t sell the amount of tickets required to give away the house as planned.

Tickets cost a whopping £10 each. And after they published the results and the judging video, it was quite obvious that anyone who had played the game would be slightly disgruntled. They also changed their Terms and Conditions multiple times, including the rewards that one could get for referring your friends.

As an example of this “YourLddr” and how their judging ‘worked’, have a look at their YouTube video of the judging:
(And decide for yourself if this was completely legitimate or not, or well executed)

UPDATE 25/08/2021: The video used to be unlisted but now it has just been deleted altogether as they attempt to scrub the Internet clean of their failures.

Now compare that to the way BOTB conducts their judging:

It’s not just the difference in production quality and value, but it’s the methodology and the fact that it all seems very dodgy. Therefore, the best thing you can do with such competitions is to save your money, and at least wait to see if they are a legitimate competition with fair judging process. As in, an actual skill-based game like spot the ball is supposed to be!

It looked like they were going to start giving out cars that you could play for with spot the ball, but only Land Rovers (Or maybe Range Rovers, can’t remember exactly anymore and can’t check as their site is down for ‘Maintenance‘). From what I can tell is that the competition never went live nor did anyone win anything. Their website looked nice and they used some people as their ‘ambassadors’ who were small celebrities I suppose somewhere in Africa, but a nice website and an endorsement from anyone doesn’t mean squat in the end if the competition doesn’t run at all.

Someone actually contacted the me asking to review that website, to which I responded with the following email:

Thanks for the message and pointing that website out.

I’ll make a full review after that competition is “live” but by the looks of it there are a few red flags that mean for me that I won’t be playing that game yet at least:

Director of Lily Black Ltd which presumably runs the competition is a nurse (https://uk.linkedin.com/in/nellie-daura-2313b718), and company is registered at an address anyone can presumably buy a virtual address from – so the competition is very far from being well established. It can be legitimate but it’s too early to say if the small operation will continue or survive the launch at all. (https://beta.companieshouse.gov.uk/company/05959720)

They also claim to have 14 people working in the team but since there probably is no proof of the team or office I would take that with a pinch of salt and say it’s probably more like 2-3 people trying to launch a new competition in the hopes of making money.

One thing I noticed was in their Terms and Conditions it says “4.2. The first promotion period ends once a minimum of 70 000 entries has been achieved. Thereafter, competitions will run weekly.” And if you do the math they want to make 490,000 USD ticket sales before they even give one Range Rover away??? I would expect them not to manage to sell 70,000 ticket entries as a new competition at 7USD a ticket, and therefore I would not play this competition in its current form.

It’s probably for the best to wait and see if they change their terms and conditions – because it looks like they won’t be giving a car away any time soon, but instead conducting a money-grab.

But after I sent the email I realised that the person who contacted was probably one of them as he was from the same town/city in Africa as the owner of the company and also in health care. They probably just wanted to promote their page for free, but got that message instead and realised that they’ve shot themselves in the foot with that one.

Needless to say I never heard back as this response probably wasn’t what they wanted to hear.

And now if you go to their website you’ll be faced with this: 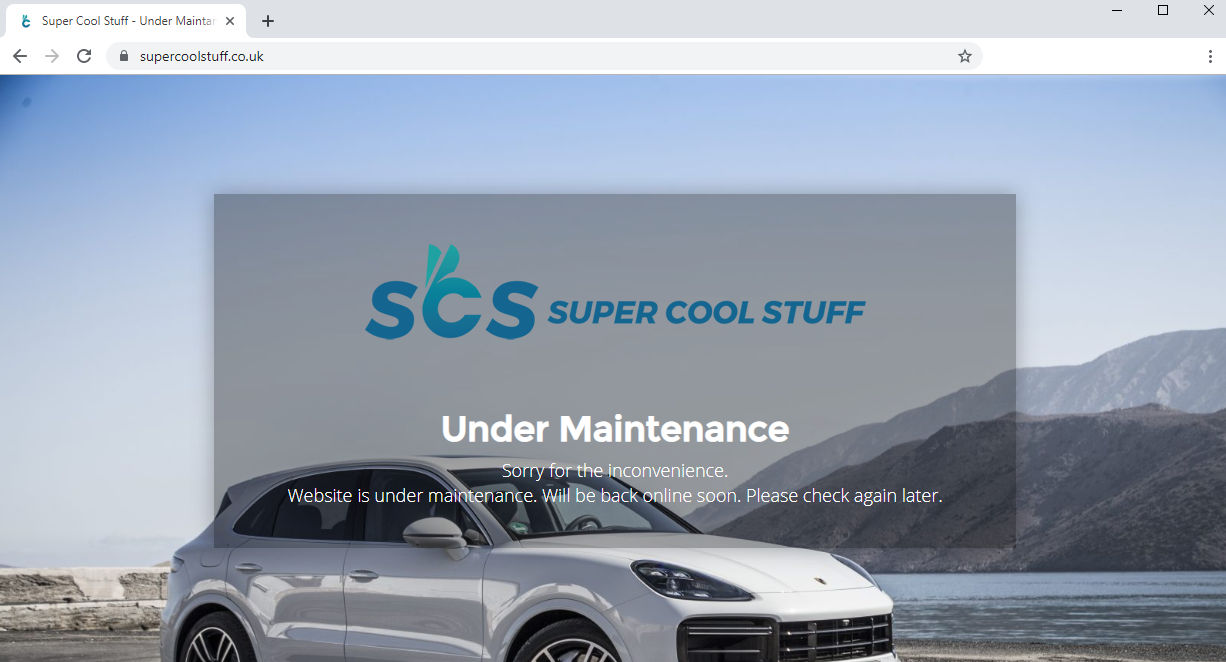 So it looks like the page is now down for “Under Maintenance” which may be essentially indefinitely. Surprising? Not really. I have waited some time before jumping the gun on this and calling it a money-grab, but the website has been down for maintenance for a really long time now – so I’m happy to call that a money-grab now with certainty.

They have since deleted all of their Social Media profiles such as their twitter @Super_Coolstuff which was heavily used to promote their business. You can still find some of their tweets in the Google Search results that don’t obviously lead anywhere since the account has been deleted.

If you happened to play this game & spend money on it – please contact PayPal or however you paid for the tickets to claim back for fraud!

Finally, I’d like to mention SpottoCash. This example is different from the ones before in the way that it was an actual competition, and a good one I would say as well, but it’s more of a tale of how difficult it is to gain a good player base for a new competition and keep the competition running for a longer period of time and staying profitable.

They were a brand new spot the ball competition that gave away a whopping £10,000 per week to one lucky winner, and they utilised David Seaman as the face of the competition. They also utilised several ways of promoting and marketing the competition, that gave the impression that they were very serious about becoming the ‘next BOTB’ like many other competitions have wanted to be before. 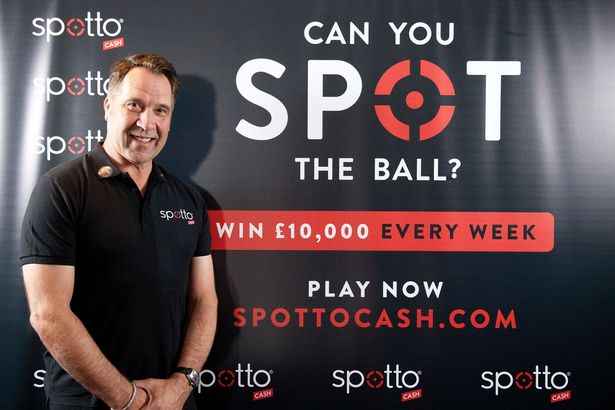 However, they must have been burning through so much money in their promotional activities and by giving away so much money so quickly, that they eventually had to made changes that looked like cost-savings rather than improvements in the competition. After giving away the £10,000 cash prize for dozens of lucky winners, they eventually took their competition down temporarily and the message on their website claimed that it would be back – and not just back but improved as well! And eventually when SpottoCash relaunched their competition, it was clear that they were just trying to stay afloat and stop burning through so much money in their operation… The competition was relaunched with holidays as prizes (worth less than the cash prize before) with higher ticket entry costs.

And this is exactly why it is extremely difficult to launch a competition like this, one that might seem ‘too good to be true’… It’s difficult to get people to believe or part with their money on something that might appear to be like a scam! This is exactly the reason as well why most of these competitions have terms and conditions that stipulate that if they don’t sell a certain quantity of tickets required, there will be a cash alternative. And most of the times these ticket sales are never met and no actual prize is ever given out. (What makes it worse is that a lot of the time the ‘cash alternative’ might be a very small percentage of the ticket sales!)

Make sure you make the final decision whether to play a spot the ball competition or not, and decide for yourself if a competition is legitimate or not. Don’t trust or give any value to ‘reviews’, celebrity endorsements, news articles (promoted content) or any other website no matter what they tell you.

Don’t especially take the word of the companies themselves or for example a newspaper. Just because a competition has been featured on the Daily Mail or the Telegraph, it doesn’t mean that the competition itself will be successful. It won’t mean it will be good, or legitimate or worth your while either. This was exactly the method YourLddr also promoted their spot the ball competition with and this made it seem better and even more legitimate to some as they heavily promoted this fact that they have been featured in a few news sites.

Let the competition run for at least a few weeks so you can see if you are happy with the judging process, and if someone actually wins anything. Don’t take part in money-grabs.

Most of the time these new competitions vanish as quickly as they turn up, because the organisers don’t understand how difficult it is to get people playing their game. Some new competitions that are launched may have the best of intentions at heart, but they might fail and fall because people are very dubious about whether a competition is real or not.